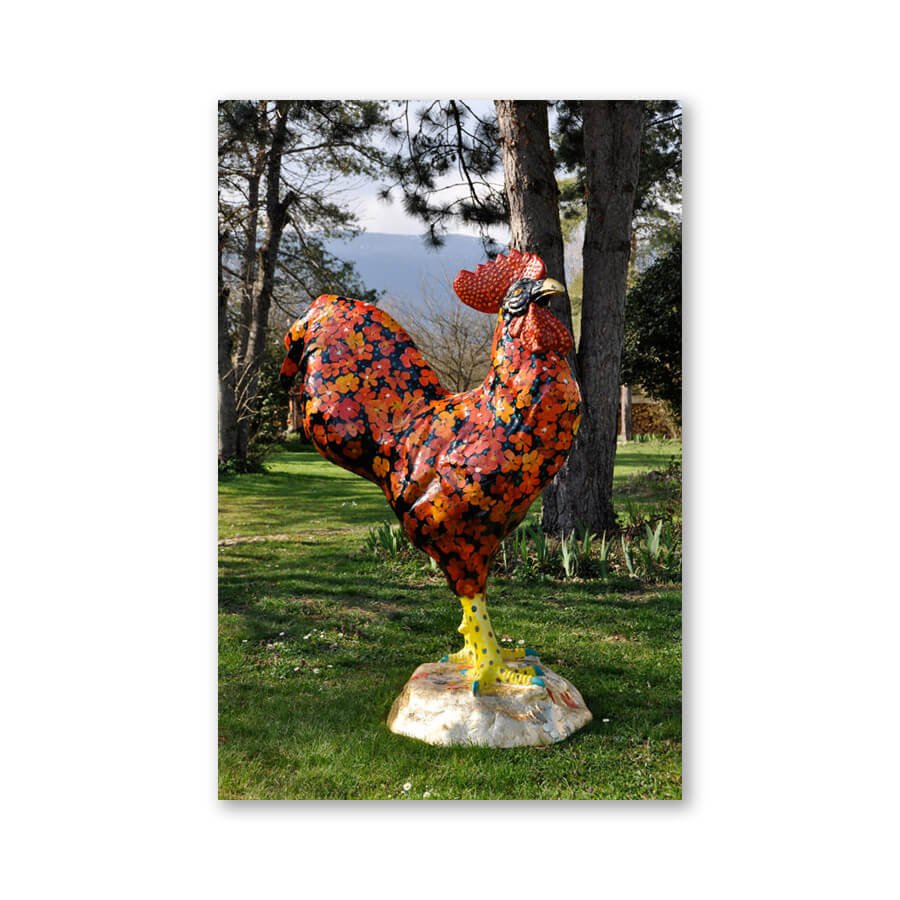 Initially my work was iconographic with the presence of deities from mythology and eventually replaced the overly spiritual presence; angels became birds,” explains Jane Le Besque in her studio at the back of her garden.

And the birds came back down to earth. Since then, they have been called chickens. “For me, the bird carries colours on its wings from one place to another. “Like a mediator, a go-between that brings light. Some of these birds have been in Bourg-en-Bresse for a few weeks now, solidly camped on their dewclaws, proud as it is not possible. It is true that they are all dressed in the most shimmering colours, frozen in rather crazy settings.

The one that Jane Le Besque has provided for the 2011 edition of Ain’Pertinentes is noticeably wiser than most of her congeners. The artist, who lives in a hamlet of Saint-Genis-Pouilly, with her husband and children, has christened it “Cooooo cot cot”, and she has covered it with paper nasturtiums carefully cut, painted and glued, in shades of red-orange and yellow.

How did she design it? “The idea was to make the chicken in the garden. “The idea was to put it there so that it would disappear, “metamorphose in the flower beds or the vegetable garden”. Rather “a metamorphosis than a camouflage”, jokes the artist.

It stayed there for a few weeks, the time to take his place and his moult, to take on the shapes and colours of the nasturtiums of its garden in the summer. Today, Jane Le Besque works a lot with cut paper, that represent the lettuces, beetroots and birds in her garden, which escape from the frames of her paintings and become landscapes in their turn.

Here, among the shrubs and flowers, amidst the tomato plants, courgettes and chards, she has composed recipe books that play with nonsense, humour and an assumed eccentricity, as much as her works of art in their contents as in their drawings. For example, the “Soufflé de pollen”, which gave its title to one of her recipe and plate books…

The chicken of Ain’Pertinentes, is it an important project for her? ” It’s interesting for me because I’ve always liked the link between cooking and painting, it’s something I’ve been able to develop with my books. »

The fact that her work is now associated with a dish created by the Lyon chef PIERRE ORSI (the “grilled Bresse chicken and toad”) delights her, of course. Even if she has not yet had the opportunity to taste this bird.