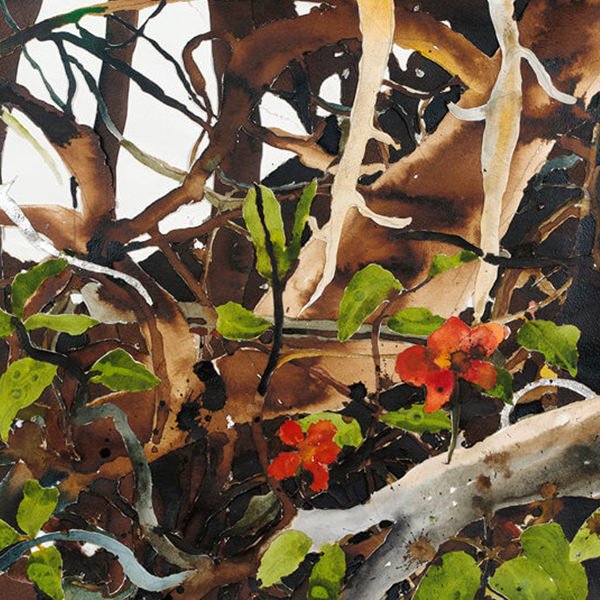 “Stroll in the forest on paper”

Born in England, Jane Le Besque chose to live and work with her family at the foot of the French Jura, her studio in the heart of the forest. “I wanted it this way because I like the idea of living like a tree”, says the painter. She finds her happiness and inspiration by walking in the forest. The exhibition of her creations at the Galerie de la Maison is an invitation to spend a day in the woods. From dawn to dusk. From the infinitely large to the infinitely small. “Most of the time the eye is drawn to trees, but there is a whole life in them that many people don’t perceive”. A secret and wild life that Jane feels with each step she takes through the forest and that she has reproduced using an original technique: “Aquallage”. It is a mixture of watercolour and collage.

Staging. “I like the fluid side of watercolour. You are freer in your movements while having the sensation of giving life “. Already at the Birmingham College of Fine Arts, from which she graduated, she had already set her sights on watercolour, which had however bad press with her teachers. This passion for watercolour did not diminish during her studies at the Ecole de Beaux-Arts in Paris, then her artistic work in Toulouse, London and now Geneva. In order to give depth to her paintings, she started to tear paper and then to glue these pieces of paper on her watercolours in the image of a theatrical staging. The twenty or so “Aquallages” that hang on the picture rails of the Galerie de la Maison offer strong and abundant images of the forest between deep and mysterious blacks and touches of light full of life.

In the showroom of the Galerie de la Maison, at the Domaine du Luc, Jane Morley welcomes during the month of November, an artist with particularly original creations, whose title is “Aquallages”.

Jane Le Besque is of British origin, but she lives and creates in the Jura. A graduate of the Birmingham College of Fine Arts, she continued her studies at the Ecole Nationale Supérieure des Beaux-Arts in Paris, before working in Toulouse, London and Geneva.

“I’ve given a lot of thought to the idea of crucifixion found in nature, for example in the image of the tree on the horizon…. “says the artist. She is seduced by the enigmas suggested to her by the earth, nature and life, enigmas that she highlights with light, “which is also that of the interior”. Light is a constant in Jane Le Besque’s works and the exhibition could be summed up as a day, since it works with dawn and closes with sunset. The result is a succession of strong, teeming, vibrant images, combining deep blacks, which drown out the interlacing of branches and flowers, with equally appealing clarity: “I tend to use a lot of black, then fight to bring in the light! »

Her technique combines watercolour, enhanced with walnut stain, and cut or torn paper. In collages. This brings a real relief, giving the artist the feeling of an approach oriented towards sculpture.

The nineteen works in the exhibition, which can be seen at the Galerie de la Maison until Sunday 27 November, take the visitor into a world at the limits of figuration and abstraction.